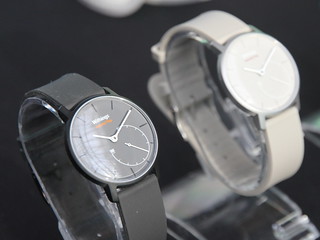 At some point in the last century, a strange thing happened: people took something that they’d been happy to carry around in their pockets for centuries and started to wear it on their wrist. Why?

That said, you may not be too surprised to hear that the smartwatch I bought was part of the 1% that aren’t like that. It is a Withings Activité Pop, which is an analog watch that happens to also talk to my smartphone using Bluetooth. Withings isn’t the only maker of this sort of smart watch, e.g. you can also get a Martian watch which takes a similar approach to being “smart”. I expect other watch makers will put chips in their watches and it will become pretty normal soon.

I am really loving my Withings smartwatch. It automatically updates the time when daylight savings changes or when I travel into a different timezone. It has a pedometer inside it, and shows me my progress towards my daily step target on a dial on the face. It also has a bunch of other features, and sometimes gets new ones that appear for free, like tracking swimming strokes. But most of all, it looks good, is light on my wrist, and has a battery life of over 8 months. While these as expected features of a normal watch, they are rather novel in a smartwatch.

As a result, smartwatches haven’t really taken off yet in the way that, say, FitBit fitness trackers have. Is the smartwatch market destined for greatness or niche-ness?

Perhaps the history of the pocket watch has some relevant lessons, for which I will be drawing heavily on Wikipedia. The wearable watch was a 16th century innovation, beginning as a clock-on-a-pendant with only an hour hand. Some 17th century improvements brought the glass-covered face and the minute hand, and they became regularly carried in (waist coat) pockets at this time. It took until late in the 18th century for the pocket watch to move beyond a pure luxury item.

Pocket watches continued to be the dominant form of watch, at least for men, until the late 19th century, when the “wristlet” (we know it better as the wrist watch) came along. The British Army began issuing them to servicemen in 1917, where synchronising the creeping barrage tactic between infantry and artillery was important, and pocket watches were impractical. Reading the time at a glance was probably the first “killer app”, and by 1930, the ratio of wrist to pocket watches was 50 to 1. Within a couple of decades, the pocket watch had been completed disrupted.

While it was more convenient to read the time on a wrist watch than a pocket watch, it was also was also awkward to wear a heavy thing on a wrist, and in terms of fashion, the wrist watch was considered more of a women’s fashion item. In the end, World War I forced the issue, eliminating the fashion consideration, and the convenience factor overcame the weight problem.

Coming back to the present, UK mobile operator O2 published a report called “All About You” in 2012 that noted 46% of respondents had dispensed with a watch in favour of using their smartphone to check the time. It seems the greater utility of a smartphone has led people to forgo their watches, even if it means that time has gone back into the pocket.

So, there’s an argument that if the smartwatch provided similar utility to the smartphone, people would again shift from the pocket to the wrist. My Withings watch doesn’t in any way substitute for my smartphone, and is really a smartphone accessory. However, something like a LG Urbane Second Edition watch runs Android and has an LTE connection for calls and texting, and is more powerful than even a smartphone of a few years ago. Speech recognition can make up for the lack of keyboard entry, and a Bluetooth headset can enable private conversations.

However, economically a smartphone is actually a games platform, and games dominate the revenues from apps on smartphones. Making the smartwatch a viable games platform may be required for it to replace smartphones. Even in the 1980s, there were attempts to create games for the wrist, but they weren’t enormously successful compared to the game & (pocket) watch versions. Admittedly, there are games for modern smartwatches. However, they drain the battery and aren’t the same calibre as smartphone games.

If we measure the period of the smartphone since 2002, when Nokia introduced Series60 handsets, it has been with us for 13 years. The pocket watch, from invention to disruption, lasted 400 years, but declined due to the rise of the wrist watch in the last 50 of those years. If the smartwatch disrupted the smartphone at the same speed, it would need less than 2 years.

All I can say is: watch this space.