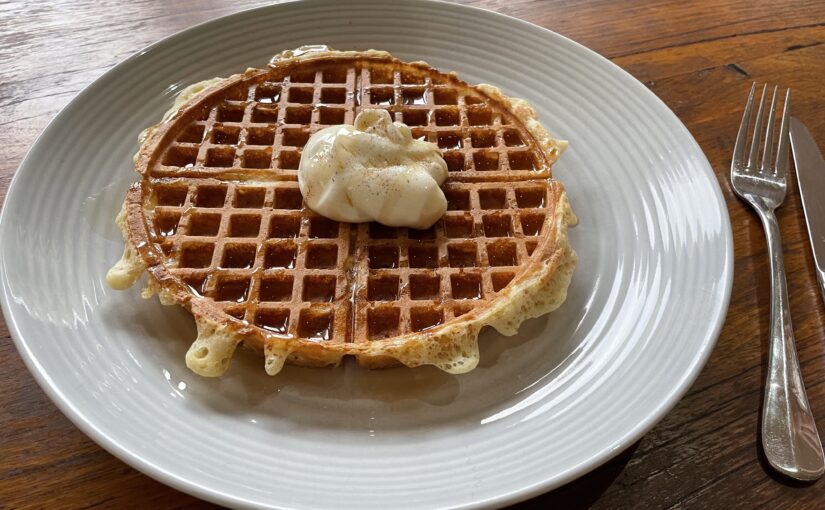 I previously described how I maintain my sourdough starter at 60g in the fridge, feeding it weekly. Since sourdough can basically triple itself in 24 hrs (or in a week in my case, since I keep it in the fridge), I need to discard 2/3rd of it each time so it maintains the same size. I also keep the discard in the fridge, in a separate jar, and it builds up at a rate of about 30g per week (with another 10g lost down the sink). What do I do with this? A popular option is to turn it into waffles!

I received a Breville “the No Mess Waffle” maker appliance as a present a few years back, before I went gluten-free, and made lots of different types of waffles. I can confidently say that this recipe makes the best plain waffle that I’ve had from the waffle maker. It has a good crispy texture and a great taste that works as a vehicle for a range of sweet toppings.

My discard jar holds about 180g of discard, so it takes around 6 weeks to fill up and that’s probably about as frequent as we’d want to make waffles. The recipe below is heavily based on this sourdough waffle recipe from Cultures for Health. Note – it does need to be started the evening before, for cooking into waffles for breakfast the following morning.

Makes 6 waffles. Serve with maple syrup, sliced fruit, berries, cream/yoghurt, or however you like them!

Surplus waffles can be frozen, separated with baking paper. They reheat well split in half and popped in the toaster!