I have been trying to get to grips with the meaning of investment “bubbles” for a couple of years now (for instance in this blog post about tulip mania). I first started to look into this during the local property boom when I was also studying finance. However, there’s increasing talk online of whether we are now in some sort of tech bubble, akin to what happened around the years 1999-2000 and resulted in the dot-com crash.

I wouldn’t say that I have a mature position yet on bubbles, but I think I know enough to say that we’re not in a tech bubble. At least, not yet.

One problem with a test for a bubble is that it is difficult to know for sure that you’re in one until after they’re over. For one sure sign of a bubble is that it ends in a crash – the bubble pops. At this point, prices of the investments in question drop quickly, and many people lose a fortune.

Other signs of a bubble, such as speculative investors (people investing because they expect prices to go up due to investor behavior not necessarily due to increase in underlying worth) or dodgy investments are present in most markets most of the time, and shouldn’t be a concern of themselves. You would hope that in a market there are a variety of positions being taken on investments for a variety of reasons, and that new investments can be introduced into a market if there is a demand for them.

Also, many markets are naturally cyclical, with regular booms following busts over time. Just because a market is hot doesn’t mean it’s in a bubble, although it probably means prices are higher than otherwise warranted, in which case you’re unlikely to pick up a bargain. But people investing for the long-term with diversification across different markets can typically ride-out a cyclical decline.

That said, the first reason I don’t believe we are in a tech bubble is that currently a decline in the value of tech start-ups wouldn’t result in the average punter losing a fortune, because the average punter is not able to invest in tech start-ups. We’re not in a situation, like back in 2000, where an ordinary investor can invest in the latest crazy tech stock on the NASDAQ. It is really VCs and Angels who are taking the risks right now. So, we can’t yet experience the sort of widespread disaster that characterizes a crash.

The other reason I don’t think even the keen anticipation for the Facebook IPO could make this a bubble is that a bubble is a description of a market and not a single investment. You can’t really talk of a 13 Pearl St Essendon bubble or an Enron bubble (even while their stock did crash and wipe many people out). We would need to see average people investing in a variety of new tech companies for there to be a bubble in the tech market.

But there may be signs that this could yet occur. Services like Kickstarter and IndieGoGo have sprung up that allow everyday people to pledge or commit money to a cause, which might be to bring a product or service to market. If causes start to take on more investment characteristics, this begins to look like a means for early stage investment in tech companies.

If I start to hear about people extending the mortgages on their homes to put funds into Kickstarter projects, I will be worried that we’re in a bubble, but I’m not worried yet. This is a topic that I’ve been mulling over in my head for a little while now, but hang in there with me as I stumble through it, because the conclusions aren’t fully formed.

I’ve noticed that often the concept of the value of something is linked to its price. If someone is willing to pay $50 for an object, then it is considered that they value it as worth $50. If we add up all purchases across a country, it is equal to that country’s GDP, a measure of the value created by that country in that year.

However, the aspect of valuing things doesn’t sit well with me. When I buy something, I don’t feel that the more I pay, the more value I’m getting. In fact, the reverse is generally true, and I imagine most people feel the same. Also, I think different people may place different values on an object, even if they pay exactly the same price for it. It seems that price doesn’t explain value, at least not completely.

Another explanation that has occurred to me is that value is not tied to an object but to a transaction. Clearly a transaction (between a willing buyer and seller at arms-length, etc.) will go ahead only if it generates value for both parties. Otherwise there’s clearly no point. And there are obvious cases when a transaction won’t go ahead: when the price is too much for the buyer, or if the price is not enough for the seller. So, this gives us a framework to identify how much value is being created. 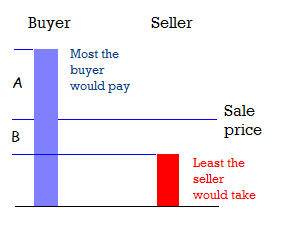 Out of A and B, it is probably B that is the best understood. In some way it corresponds to the seller’s profit, or perhaps risk-adjusted profit. But not always, since the seller may be willing to make a loss in order to recover some money for their stock. So, in this version of value, based on the fact that a transaction will occur only if both parties see some value in it, a technical loss (sale price less than nominal cost) must still be value positive.

The value A is not easily described since most people don’t explicitly calculate the most they would be willing to pay for their milk, eggs, petrol etc. and are even less likely to tell you about it. However, one exception is in auctions. (Hopefully) most potential buyers at an auction have figured out the most they would be willing to pay. Although, their upper limit may be more influenced by the amount of money at their disposal than by the benefit they will gain through possessing the item. (It may turn out to be impossible to accurately estimate A in most situations.)

As mentioned before, the overall value created from each transaction is A+B, which is also the difference between the most the buyer would pay and the least the seller would take. This number is independent of the price chosen for the transaction, and is clearly “better” the more the expectations of the buyer and seller diverge.

It would be interesting to see what figure we’d get if we added up the A+B numbers for all the transactions that occurred in a country for a year, and compared it to the GDP. I think it would provide a more accurate representation of the economic value created.