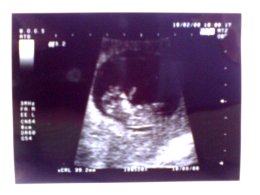 We’re now telling people something we were denying before – that we’re expecting a baby. Kate’s 17 weeks pregnant, in fact. And the baby’s due around 10th September.

It’s a relief to no longer have to cover it up, and it’s exciting to be able to announce it to people. However, it’s a bit odd that something so positive is typically hidden from friends for several months before being suddenly sprung on them.

Ironically, the friends often already know, or at least are pretty suspicious. The signs are everywhere, and good friends tend to notice. Even if there is no morning sickness or change in body shape, the dietary hints are pretty clear. They wonder why a glass of wine, normally happily accepted, is now sadly refused. They ponder why the brie and proscuitto goes uneaten, and perhaps even why the seafood option isn’t chosen from the menu (although that’s never an option for us anyway). And particularly, “women of a certain age” are well attuned to these signs in their friends, but in the end are too polite to ask.

So, those people who we find it so painful to hide the news from are the very people that know anyway. Both parties (us and them) engage in a comedic farce where we all pretend nothing is going on at all, while desperately wanting to speak about it to the other.

But now, released from that cultural prison, I can tell you that I am very pleased (although a bit terrified) about the idea of becoming a dad.