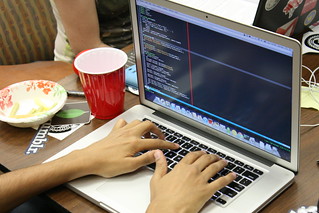 Last week, I participated in my first Hackathon. It was an internal one for Telstra employees, but there were around 40-50 people involved, and my team ended up winning – which was awesome. However, the experience of being part was a reward in itself, with the collective energy creating a real buzz, and there was a huge amount of satisfaction in being part of something so productive.

Since it was all internal development, I’m not going to share the details of the idea. However, I was one of the two developers on the team (we were also joined by an awesome interface designer and fabulous digital sales person) and I wrote a back-end server in Node.js that had to implement a web server, IMAP to Gmail, and OAuth to Box.com. I’d been doing some serious Node.js development in a previous project, so I didn’t have to learn that, and the IMAP stuff wasn’t too different from a hobby project I’ve discussed before (although that was in Python). Getting OAuth to work was the main hurdle, but the advantage of picking popular frameworks and services is that others are likely to have solved the major problems before me, and Stack Overflow was a good source of solutions.

In any case, I thought it might be worthwhile to share a couple of the things that I think I did well, and which might help others going into their own Hackathons. Putting aside the strength of the idea and the talent possessed by the team – which would have been the principal things that helped us win the top prize – I think there were three things that put us in the best position to pull it off.

1. Networking prior to pitching

The start of the Hackathon was to build a team on the strength of a one-minute pitch, and around half the participants pitched an idea. So, it was a pretty competitive way to start things off, and one minute isn’t much time to sell yourself and your idea. However, before the pitching began, there was about a half hour of social drinks (the Hackathon started after work had finished for the day).

I decided to use the social drinks time to be social, rather than just chatting to people that I already knew. As it turned out, this was a good thing to do, since a natural ice-breaker was to ask if someone was planning to pitch an idea, and to share the idea I was planning to pitch. This meant that I got to speak to several people for longer than one minute about my idea, and one of those people ended up deciding to join my team.

This was a lucky break, since once the one-minute pitches were all done, there were now two of us going around selling the project idea to others. I doubt I would’ve gotten a project team together without this, since I hadn’t pre-arranged a team to work on the idea.

2. Knowing ahead of time how to achieve the idea

Luckily, the idea was one that I’d done some initial work on with others in Telstra. Also, I’d done a bit of research to see how a useful version of it might be implemented in the time available. One of the rules was that we had to use a partner API, like that of Box.com’s, so for example I had a quick look to see that the APIs would do what was needed.

As a result, I was able to explain clearly at the start how I proposed that we would go about building something. Also, I was able to respond to a variety of objections and arguments that were put to us by mentors, peers and judges during the Hackathon.

That’s not to say that I was stubborn or unmoving when it came to the idea (at least, I’d like to think I wasn’t). It’s just that I wasn’t making decisions or coming up with responses from a position of ignorance. We did explore a couple of variants of the idea as we went along and there were additional features that were built that I hadn’t originally thought of. However, we were very focussed, and I think this helped in realising the idea.

If you haven’t heard of Tuckman’s Forming, Storming, Norming and Performing stages of team development, add it to your to-do list to read up. (Or do it now – I’ll wait here if you want.) I was conscious that the team had only a limited time to complete the project, and a major risk was consuming valuable time in internal team politics. We needed to get to the Performing stage as quickly as possible.

Rather than detail exactly how the team evolved, I’ll just mention a few things that I think helped us progress:

That said, the team was made up of easy-going people, so it was probably less likely we’d have a big falling-out. However, since I didn’t know any of them in advance, I didn’t know this.

We also spend a couple of hours prior to the final three-minute presentation going over (and over) the demo and presentation. This was worthwhile, but an obvious thing to do.

So, I think I ended up with a winning team through a combination of good luck and good planning. However, while I can’t help with the luck, I hope the above tips would aid you if you’re entering a Hackathon. I hope you enjoy it as much as I did.

One thought on “Hackathon Tips”