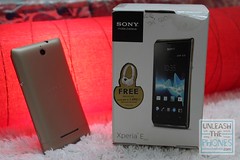 One of my handsets is a Sony Xperia E C1504 (code-name Nanhu) which was a low-end-ish Android handset when it launched in early 2013, and was apparently relatively popular in India. One of its claims to fame is that it was also one of the first handsets to have a version of Firefox OS available for it. But why I’m writing about it here is that Sony has been hassling me to upgrade it to the most recent version of firmware (11.3.A.2.23), and recently I gave in, but since I was mucking about with the firmware I thought I’d “root” it as well. And therein lies the tale.

Although, as is often the case with Android when wandering off the well-trod path, it’s more of a cautionary tale.

Before you can do anything, you need to get the right USB drivers set up on your PC, which is a world of pain itself. Complications come from whether the PC is running a 32-bit or 64-bit operating system, whether the drivers are 32-bit or 64-bit, whether the drivers support ADB, fastboot, or (for Sony) flash modes, and which particular USB port the cable is plugged into (and for which mode). I’m running Windows 8.1 64-bit, which seems to have limited driver support for this sort of thing.

Pro-tip: If something’s not working, try another USB port. Try all of them.

Sony provides an official way to unlock the bootloader. Be warned that although it’s “official”, it will still void your warranty, and potentially brick your device. Ensure everything that is valuable on the device has been backed up somewhere else. At the very least, all apps and configuration on the device will be lost anyway.

I followed the unlocking instructions from Sony Developer World. However, my device immediately stopped working afterwards. It would go into a boot loop, showing the Sony logo, then the boot animation, then back to the Sony logo, and so on. The solution was to reflash the operating system.

I download the Flashtool that’s available from Flashtool.net (I used Flashtool64 since I have a 64-bit Windows). It’s the one that’s commonly used in the Sony Android custom ROM community.

I followed the instructions at XDA Developers to flash the 11.3.A.2.23 version of the C1504 firmware onto the device (the newest version currently available). This happened to be an Indian build of the firmware, so I’ve ended up with some links to Shahrukh Khan videos on my device as a result. :)

It was pretty hard to find these instructions. Most Sony Xperia E firmware flashing instructions refer to the C1505 version, which has support for 3G at 900MHz instead of 850MHz. Since Telstra’s 3G network is 850MHz, I need this capability of the C1504, and didn’t trust that C1505 firmware would give me what I wanted.

Now my handset booted again, but aside from the Shak Ruhk Khan videos, I hadn’t gained anything new yet.

The two most popular Android recovery partitions are from CWM (ClockworkMod) and TWRP (Team Win Recovery Project). I’ve used both in the past, but this time I chose CWM since it seemed to be more widely tested on the Xperia E. Unfortunately, I found that most of the instructions for installing the CWM recovery resulted in Wi-Fi ceasing to work on my device. I also tried to build a new version of CWM for my device, but the CWM build tools didn’t support it.

However, I found someone had built a version of the ZEUS kernel (replacing the default Sony Xperia kernel) that included CWM recovery, and this wouldn’t have the Wi-Fi issue. I followed the instructions at XDA Developers to flash that onto my device.

Now when I turned on the device, it booted as normal, but a blue light appeared at the base of the device at the beginning when the Sony logo is shown. When the blue light is shown, the device can be diverted to boot into CWM recovery rather than the default Android system by press a volume key. However, I needed to put a superuser tool onto the device’s SD card before this new feature would be useful.

The superuser tool is made up of two files (a system application called “su” and an Android app called “Superuser.apk”), but both are stored within a zip file for easy installation. I got the zip file from the AndroidSU site (the one labelled Superuser-3.1.3-arm-signed.zip).

I installed the zip file onto the sdcard simply by enabling the Developer Options on the device (under Settings) and ticking the USB Debugging option, then attaching the device to my PC via USB, and using the command on my PC:
adb push Superuser-3.1.3-arm-signed.zip /sdcard/

I disconnected and rebooted the device, and when the Sony logo appeared (and the blue light), pressed a volume key. The device booted into the recovery partition. I followed the instructions at XDA Developers (starting at step 5).

And that’s all (!). Now I can boot my unlocked, rooted Xperia E (C1504). Remember, if you’ve followed along with these instructions, you’ve voided your warranty. But at least now you can install whatever you want on the device, or change any of the configuration settings.

One thing you might want to install straight up is a build.prop editor, such as the mysteriously named Build Prop Editor, to change configurations. For example, tweaking the network settings for the Australian mobile operators seems to improve performance. I haven’t tried these myself yet, but it’s an example of the sort of thing that can be done.