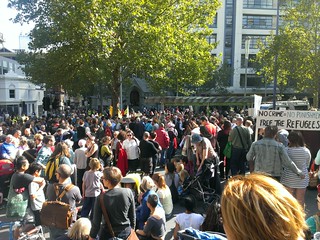 I joined today’s Palm Sunday Walk (a.k.a. Walk for Justice for Refugees), and I was asked why I bothered, since governments have a long tradition of ignoring protest marches. This post is meant to briefly explain why.

Firstly, while some protests have a long list of vague things that those involved are against, this march at least had a clear message about what it was for: justice for refugees.

However, I cannot accept that any type of deterrent be used in the implementation of this policy. Breaches of human rights, including conditions akin to torture, cross a line. Australia is a civilised nation, we follow the rule of law, and we treat people humanely.

While I wasn’t happy with the policies of either our previous Prime Minster or the current PM, I wouldn’t have marched in protest against those policies. (I rarely march in protest against anything.) However, the recent events of Manus Island, including the circumstances that led to a death of a refugee, are not consistent with how we treat people in this country.

I was there today to be counted. I don’t expect our current government to immediately change anything, but I don’t want to let the current implementation of their policies be silently accepted. They will likely do what they feel they have the power to do, but they shouldn’t think that it’s acceptable to the wider community.

Australian institutions are accountable to the standards of the community that they operate in.

One thought on “A protest”