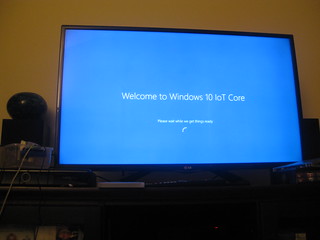 I was one of those who ordered the Raspberry Pi 2, when it was announced back in February 2015, off the back of the claims that it would run Windows 10. Not the full desktop version of Windows 10 of course, but a version for simpler devices. Still, it impressed me that here was a $36 computer that could run the latest version of Microsoft Windows.

Unfortunately, while the Pi 2 became available back then, the required version of Windows was not. It’s only been in the last month that Microsoft launched Windows 10 IoT Core, so I’ve finally had a chance to try it out.

For those that also are interested in this option, I thought I’d note down my experiences on installing it, connecting to it and running software on it.

There are some official instructions provided by Microsoft on how to do this. However, they require that you are running Windows 10 on a PC, and none of my computers have Windows 10 yet. I also didn’t want to use up the hard disk space that would be needed if I had set up a Windows 10 virtual machine. I was more interested in unofficial options.

Once the Pi got going, I needed to tell it what language to use. I had plugged a decent quality USB keyboard in, but it was extremely finnicky: key presses were seemingly ignored. In the end, I plugged a USB mouse in and it was much more responsive to mouse clicks.

Windows 10 IoT is really designed to run a single GUI application. It boots into one that shows the hostname and IP address for the Pi, as well as displaying some simple tutorial instructions. It’s designed to connect to Visual Studio 2015, and allow a developer to push their application straight to the Pi. However, I don’t work with my Pi that way – I connect into it and configure/run it via a remote shell.

It’s possible to SSH straight into the Pi (as user Administrator, initially, until you set up some other users). You basically get a DOS prompt. Cool! What was less straightforward was getting files onto it.

As mentioned above, the standard way to get software running on Windows IoT is for Visual Studio to load it onto the Pi over the network. However, I’m more interested in running standard server apps that don’t rely on the Microsoft ecosystem, so I focussed my efforts on getting Node.js to run on the Pi.

Microsoft is doing some very cool stuff around supporting platforms like Node.js and even Python on Windows IoT. It’s still very much in its early days, but shows promise.

Here’s what I did:

While I could run simple Hello World style programs with Node that wrote text out to the screen, I was unable to get working a slightly more advanced Node program that ran a basic webserver.

It was fun to see Windows 10 boot up on the Raspberry Pi. However, I was a little disappointed how limited it was, given how powerful a Pi is with the default Linux-based OS.

Microsoft’s approach to developing for the Raspberry Pi brings something new to the space, and may make the platform more accessible to developers who are already adept with Microsoft tools. Still, it would’ve been nice to see the basic image come with something immediately useful, if only the new Edge web browser (this would’ve make super-cheap Internet Explorer based kiosks really simple to create).

There’s the old saying that you should always wait for the third version of a Microsoft OS. I don’t know if we’ll need to wait that long for a compelling Microsoft OS on Raspberry Pi, but I am excited to see what Microsoft does with this in future.