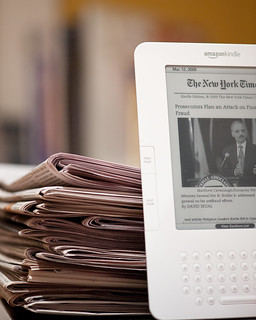 Whatever the circumstances that led someone at The New York Times to leak their report on Innovation, I am thankful. Published (internally) in March, it is the fruits of a six month long deep-dive into the business of journalism within a company that has been a leader in that industry for over a century, and provides an intimate and honest study into how an incumbent can be disrupted. It is 97 pages long, and worth reading for anyone who is interested in innovation or the future of media.

The report was leaked in full in May, and I’ve been reading bits of it in my spare time. Just recently I completed it, and felt it was worth summarising some of the lessons that are highlighted by the people at the Times. As it is with such things, my summary is going to be subjective and – by nature – highly selective, so if this piques your interest, I encourage you to read the whole thing.

(My summary ended up being longer than I’d originally intended, so apologies in advance.)

Because of the principle of editorial independence, the Times has clear boundaries between the journalists in the newsroom and those who operate “the business” part of the newspaper, which has been traditionally about selling advertising. This separation is even known as “church and state” within the organisation, and affects everything from who is allowed to meet with whom (even during brown-bag lunch style meetings) to the language used to communicate concepts. This has worked well in the past, allowing the journalism to be kept at the highest quality, without fear of being compromised by commercial considerations.

However, the part of the organisation that has been developing new software tools and reader applications is within “the business” (not being journalists), and has hence been disconnected from the newsroom. Hence new software is not developed to support the changing style of journalism, and where it is, it is done as one-off projects. Other media organisations are utilising developers more strategically, resulting in better tools for the journalists and a better experience for the readers.

Lesson: Technology capability needs to be at the heart of an innovation organisation, rather than kept at arms-length.

For a very long time, the main customer of the Times has been advertisers. However, print media is facing a future where advertisers will not pay enough to keep the organisation running. Online advertising pays less than print advertising, and mobile advertising even less again. Coupled with declining circulation due to increased digital readership, the advertising business looks pretty sick. But there’s a new type of customer for the digital editions that is growing in importance: the reader.

While advertising revenues had the potential to severely compromise journalism, it’s not so clear that the same threat exists from reader revenues. In theory there is a good alignment: high quality journalism results in more readers. But if consideration of attracting readers is explicitly kept away from the newsroom as part of the “church and state” division, readers may end up being attracted by other media organisations. In fact, this is what is happening at the Times, with declines in most online reader metrics, and none increasing.

In the print world, it was enough to produce a high quality newspaper and it would attract readers. However, in the digital world this strategy is not currently working. Digital readers don’t select a publication and then read the stories in it, they discover individual articles from a variety of sources and then select whether to read them or not. The authors of articles need to take a bigger role in ensuring those articles are discovered.

The rules for success in digital are different from those of traditional print journalism, although no-one really knows what they are yet. That said, the Times newsroom has an ingrained dislike of risk-taking. Again this made sense for a newsroom that didn’t want to print an incorrect story, and so everything had to be checked before it went public. However, this culture inhibits innovation if applied outside of the news itself.

Not only does it a culture of avoiding risks prevent them from experimenting and slow the ability to launch new things, but smart people within the organisation risk getting good at the wrong things. A great quote from the report: “When it takes 20 months to build one thing, your skill set becomes less about innovation and more about navigating bureaucracy.”

Also, the newsroom lacks a dedicated strategy and operations team, so doesn’t know how well readers are responding to experiments, or what is working well for competitors. Given that competitors are no longer only other daily newspapers, it’s not enough to just read the morning’s papers to get insight into the competition. BuzzFeed reformatted stories from the Times and managed to get greater reader numbers than the Times was able to for the same stories.

Lesson: If experimentation is being avoided due to risk, then business risks are not being managed effectively.

It turns out that people experienced in traditional journalism don’t automatically have all the skills to meet the requirements of digital readers. However, the Times has a bias for hiring and promoting people in digital roles based on their achievements as journalists. While this likely worked in the past to create a high quality newspaper, it isn’t working in digital. In general, the New York Times appears to be a print newspaper first, and a digital business second. The daily tempo of article submission and review is oriented around a daily publication to be read in the mornings, rather than supporting the release of stories digitally when they are ready to be published. Performance metrics are still oriented around the number of front page stories published – a measure declining in importance as digital readers cease to discover articles via the home page.

The lack of appreciation for the digital world and digital people in general has resulted in the departure of a number of skilled employees, according to the report. Hiring digital talent is also difficult to justify to management given that demand has pushed salaries higher for skilled people even if those people are relatively young. What could be a virtuous circle, with talent attracting talent, is working in the opposite direction with what appears to be a cultural bias against the very talent that would help the Times.

Lesson: An organisation pays for the talent either by paying market rates for capable people or paying the cost in lost opportunities.

When I first came across the NYT Innovation report, I expected to read about another example of the innovators’ dilemma, where rational business decisions kept them from moving into a new market. Instead, the report is the tale of how the organisation structure, culture and processes that made The New York Times great in the past are actively inhibiting its success in the present. Some of these seem to have become sacred cows and it is difficult for the organisation to get rid of them. It will require courage – and a dedication to innovation – to change the organisation into one that is able to compete effectively.