This is something that blew my mind last week. Some paleontologists are convinced that there were fewer dinosaurs than we thought – that some different types of dinosaurs were just the adult form of another one, despite the fact that they look completely different. It’s explained in this 20 minute TEDx talk: 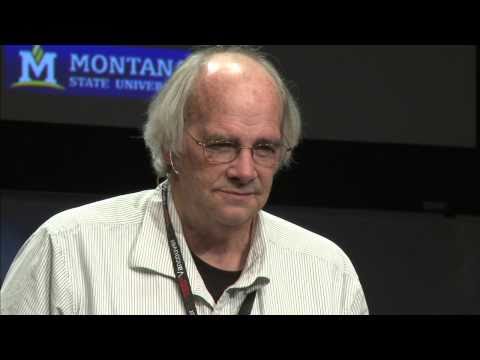 To completely spoil the video, Jack Horner (the paleontologist inspiration behind Jurassic Park) believes that:

and he deduces this through cutting open dinosaur skulls and bones at the Museum of the Rockies where he is the curator. Those skulls/bones of the suspected “younger” dinosaurs are spongy while the “older” ones are more solid. If other museums were happy for scientists to cut open their dinosaurs perhaps this would’ve been discovered sooner.

But perhaps there’s another angle. If women were more involved in the science of paleontology earlier on, perhaps this would’ve been discovered sooner.

Part of the basis for the theory is that no child dinosaurs (ie. small / less-developed specimens) of the now-suspected “older” dinosaurs have been found to date. To my admittedly non-expert mind, this is pretty damning evidence right there. According to Wikipedia, the Torosaur (for example), was first discovered in 1891. Somehow, it has taken over a hundred years for a dinosaur expert to come up with evidence to support the simple theory that the reason there are no child versions found in all this time is that there are no child versions, ie. that it is an adult version.

Horner himself puts forward the explanation that scientists just like to name things – the more dinosaurs, the more chance for names. However, attempting to put on a feminist-shaped hat, I would also think that an alternative explanation is that the predominantly male dinosaur collectors  of the early years of paleontology were not interested in looking for child dinosaurs – the only interesting dinosaurs were the big ones, that probably also turned out to be the male ones. I wouldn’t blame the individual collectors for this – I would think it likely that this was the culture of the industry at the time. Hence, it’s only as the industry changed, and more women came into it for example, that such thinking changed – thinking that enabled a real interest in finding child dinosaurs and explaining what happened to them. (And I realise that I’m falling for a stereotype here that women would be more interested in dinosaur children than men would be, but I suspect it’s true all the same.)

This is merely a hypothesis, and informed merely by personal speculation and a few web searches today. For example, an article from 2010 in Wired trying to identify significant female paleontologists in the face of a complete lack of their public presence. Also, a blog post from a female paleontologist describing how it has traditionally been a male-dominated profession (the photos of Paleontologist Barbie are worth a look, too). In any case, I wonder if there will be further breakthroughs due to the changing gender mix in science.

This month’s book club had us read a book I first read ages ago, and it was a real pleasure to re-read and find that I still liked it. In fact, I unsuccessfully nominated it as a book club book ages ago (another one of my nominations was selected that month instead), and it was also nice to find that it worked well for book club discussion.

The Daughter of Time

Josephine Tey – the pen-name of Phys Ed teacher turned author Elizabeth Mackintosh – is apparently know for her not-to-formula mystery writing. This is the case here, where the detective has to solve the mystery while stuck in a hospital bed, and the mystery dates back 500 years. However, the bed-bound-detective is not the only quirky character, with a cast of contemporary and historical figures parading through the story. Together with the joyous writing itself, I found the book a treat to read.

One down-side is that it was written for an English school-system educated audience from the 1950s, and assumes that you have a fair grasp of royal lineage and history. If you consider War of the Roses to have been an average movie, then you may need (like I) to just let the references to multiple Edwards, Edmunds and Elizabeths just flow past and be confident that it will all come together in the end.

While the book tries to overturn the popular account of one of history’s most infamous kings, it also takes some jabs at history in general. The author clearly has felt frustrated by both historical accounts and historical fiction, as well as the annoying tendency for a good story to survive better than the facts. I came across a post recommending this book on the go-to site for geeky current affairs – Hacker News. Unusually for me, I ordered it on the strength of that.

A new employee guide at 37 Signals

This is the type of book that can probably be read in 1/2 hr, but I read it in stops and starts on the train to/from work. It’s a collection of 1 or 2 page write-ups on business topics, distilling the wisdom of Jason Fried and David Hansson from web productivity company 37 Signals.

While it aims to offer practical advice on how to work more effectively, I found that most of the advice didn’t make sense in the context of my job, and I now struggle to remember any of the advice a couple of months after having read it. It has resulted in no improvement to my work routine, despite my initial interest in the promise from the front cover to “change the way you work forever.”

On the other hand, I could see how it might be useful to a reader who is running or would like to run a small business (e.g. two themes are competitors and damage control). However, I can also see how it would be most useful to Fried and Hansson in normalising their preferred work culture within their own business. I would not be surprised if every new employee was given a copy of this book on their first day at 37 Signals.